I have unsuccessfully attempted to make a vegan gluten free brownie for many years.  It’s quite the task to get the desired moist, slightly chewy texture without eggs and gluten.  The ingredients that make a difference are flax seed and dates!  The recipe is so easy too.

Warning: These are not ‘healthed up’ to the nth degree like most of my recipes! They contain coconut oil.  So if you are cleansing or trying to break a sugar addiction, do not make these!   They are great for my fellow sweet toothed folks and kids as an occasional treat maybe once per month or so.

1/2 cup oat flour.  Blend rolled oats in a coffee grinder to make your own 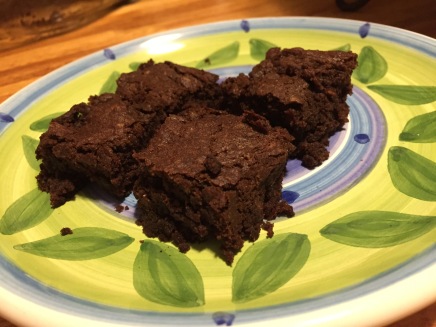 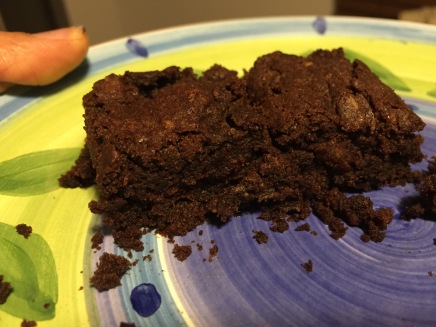 Happy Healthy 2017 Readers! One of my favorite wellness books is the Pleasure Trap by Dr. Doug Lisle. It has inspired previous blog posts. I was reading it for the second time (as I have recently bought copies to give to new clients.) This book is a must read for everyone. Yes, it promotes a plant based lifestyle (of course) but it really offers so much more by way of explaining why we crave modern foods and have become addicted to them and how they are making us sick and shortening the length and quality of our lives.

The chapter on the concept of moderation is particularly thought-provoking. He states that when trying to break bad habits in an effort to become healthier, thinking that indulging moderately in the same behaviors that led to our unwanted conditions is not productive. Many unhealthy foods, due to their processed nature are very addictive and he likens them to highly addictive drugs. Surely some one getting over a drug, alcohol or smoking addiction would not use just a little cocaine, have just one drink or smoke only one cigarette. They know that consistent abstinence is their best chance at beating the addiction.  Moderation is a healthy approach with some things in life but when we are dealing with foods that have been artificially enhanced for the purpose of making them irresistible, trying to achieve moderation (whatever that means) is simply not going to work.   See my post The Dietary Pleasure Trap: Defend yourself against the temptations of modern life. to learn more about this.

When I decided to write this entry I was worried about offending people I know well, by stating that the widely held belief that ‘everything in moderation is fine’ is not a great approach to making significant health improvements. I thought, how does one get to the point where you want to know the truth and you are willing to change your perspective? I came up with this five-step process to making permanent beneficial change. The resulting acronym is C.L.E.A.N.

CURIOSITY– You must have a desire to seek more information and want to know the facts. This is why I typically point others in the direction of educational books, articles and documentaries. Listening to my personal opinion is not convincing enough and even if it gets you thinking, finding the information on your own is so much more powerful.

LEARN– The next step is to learn. There are several wonderful books, articles, videos and films that present solid information in very interesting ways.  Do not depend on mainstream media to tell you the truth.  There are profit motives at play and I have found much of that information to be flawed. Ask questions and find the answers.

EXPLORE– Next you must experiment with this new found information and experience the benefits for yourself. After years of experimenting I have a developed a regiment that works for my lifestyle and has made me energetic, satisfied with my appearance, happy and inspired to help others.

ASSESS– After a few weeks, assess and analyze the outcomes and continue to tweak your approach and seek more information. This is critical in staying informed and hence motivated to stay on track.  In the beginning of any transition, the more reinforcement you have, the better the chance you have of sticking with it until it becomes a part of your everyday life.  Just about anyone who knows me, knows I drink a fruit and vegetable smoothie almost everyday.

NO TURNING BACK– Once you have made enough progress to see un-deniable benefits you should have developed new life long habits and the threat of relapsing is gone.

I am by no means perfect even though I have made several significant and permanent changes to my lifestyle. One huge benefit I have is that I am aware of the pleasure trap and how it works and I have accepted the philosophy that when speaking about long term and short term health, consistency is a much better plan than the ambiguous concept of being moderately unhealthy.

The following information was summarized from an article by Peaks coaching and written by Hunter Allen a Professional cycling coach and cyclist.

Your functional threshold power, or FTP, is the maximum power (measured in watts) you can maintain through an hour’s effort without fatiguing.

Your lactate threshold  (LT) or FTP (the level of exercise intensity at which lactate begins to accumulate in your blood) is a powerful predictor of your endurance performance ability. This is because, although your maximal oxygen uptake (VO2max) sets the upper limit to your aerobic energy production rate, it’s your LT that determines the amount of this VO2max that you can utilize for any length of time.

Your FTP tells you how well your muscles are able to match their energy supply to your energy demand, which in turn determines the fuel “mix” (i.e., carbohydrates versus fat) your muscles use and how they fatigue. Consequently, FTP(especially when expressed as power output) is the single most important physiological determinant of performance in events ranging from a 3km pursuit to a three-week stage race.

So how do you figure out your FTP? One way is to get laboratory testing done with blood samples. Determined this way, however, FTP is often significantly below what athletes and coaches think of as a threshold.

A much more convenient, simple, and possibly more accurate method of determining your FTP is to use data collected by your own power meter as you ride. There are a number of different ways to do this, all of which provide very similar estimates of FTP. I think the best way to do it is to jump on your bike and go for a ride specifically designed to find your threshold.

Your goal in this test is to average the highest watts possible for a lengthy period of time. (Hint: When you get to the main effort, make sure to pace yourself so that you don’t tire too quickly.)

The ride is laid out as follows:

The purpose of the drills in steps 1-3 is to open up the legs for the test, and second, to measure your ability to produce watts in the VO2max power zone. This effort also helps to dispense the “freshness” that always exists at the beginning of a ride; your next effort will produce power that is more likely to be truly representative of your FTP.

Your goal in the main portion of the test (the 20-minute segment) is to produce the highest average watts possible over the entire time. The test doesn’t work if you start out too hard and suddenly run out of energy, because you won’t be able to produce your true maximal, steady-state power. It’s always better to start out in the first two minutes a little under what you believe to be your FTP, build up along the way, and then ride at your maximum level in the last three minutes.

The reason for subtracting 5% from your average watts during the 20-minute test is that your true FTP is the highest average power you can maintain for sixty minutes. Most athletes have a hard time putting out maximal effort for sixty minutes, however, and those who can learn very quickly that a sixty-minute time trial is not much fun. I’ve found that twenty minutes is a more realistic time frame. It’s obviously a shorter time period, however, and it incorporates more of the athlete’s anaerobic capacity, which skews the wattage data by about 5% over a sixty-minute effort. By subtracting that 5%, you end up with a wattage number that should be very close to your true FTP.

Avoid strenuous exercise 48 before the test so your legs and lungs are fresh and well rested for an accurate test.