Have you ever tried making quinoa at home only to have turn out mushy or too dry?  I used to have the same issue and I wondered how restaurants produced the perfect quinoa.  I figured it out about a year ago.  I realized others faced the same challenge so I’m sharing  my secret step by step process with you.  No offense to the quinoa retailers, but following the directions on the packages did not work for me and you probably followed the same directions if your quinoa hasn’t been satisfactory. 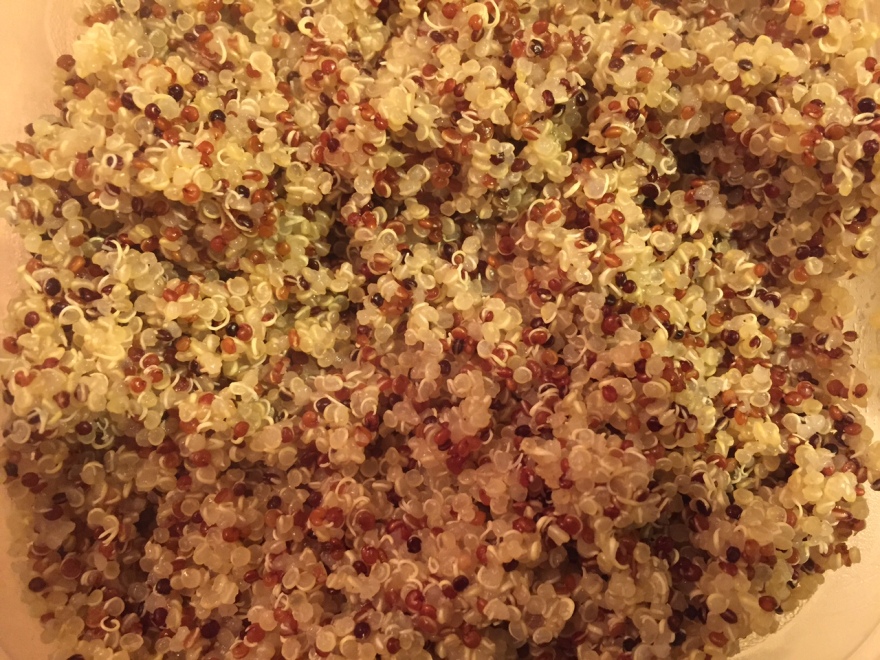 Soak your quinoa for at least 4 hours before cooking it and rinse it after soaking.  Drain it well in a strainer.  Soaking it makes it easier to digest.  The bitter saponins are more easily removed when it’s soaked and rinsed.

Bring a pot of water to a boil and add the quinoa.  Use 1 1/2 times more water than quinoa. For example, if you started out with 1 cup of uncooked quinoa before soaking it, boil it in 1 1/2 cups water.

Here’s the part where we all mess up.  DO NOT REDUCE THE HEAT TO BRING QUINOA TO A SIMMER!  That’s what the package tells us to do and them your quinoa is ruined.  Keep the water at boil and make sure it doesn’t boil over.  You can reduce the heat but make sure it’s still boiling.

Stir occasionally and watch it closely as the water gets close to vanishing.  Divide the quinoa so you can see the bottom of the pot to see if there is still water underneath and turn the heat off the moment there is no more water underneath.  The cooking process takes no longer than about 12 minutes, but may be faster.  A few grains may stick to the pot.  Grains should turn translucent and have a little tail.

Let it sit for a few hours then fluff with a fork.

That’s it.  The secret is boiling it all the way through and not turning down that heat.  Try and let me know how it goes.

One thought on “How to make perfect quinoa”